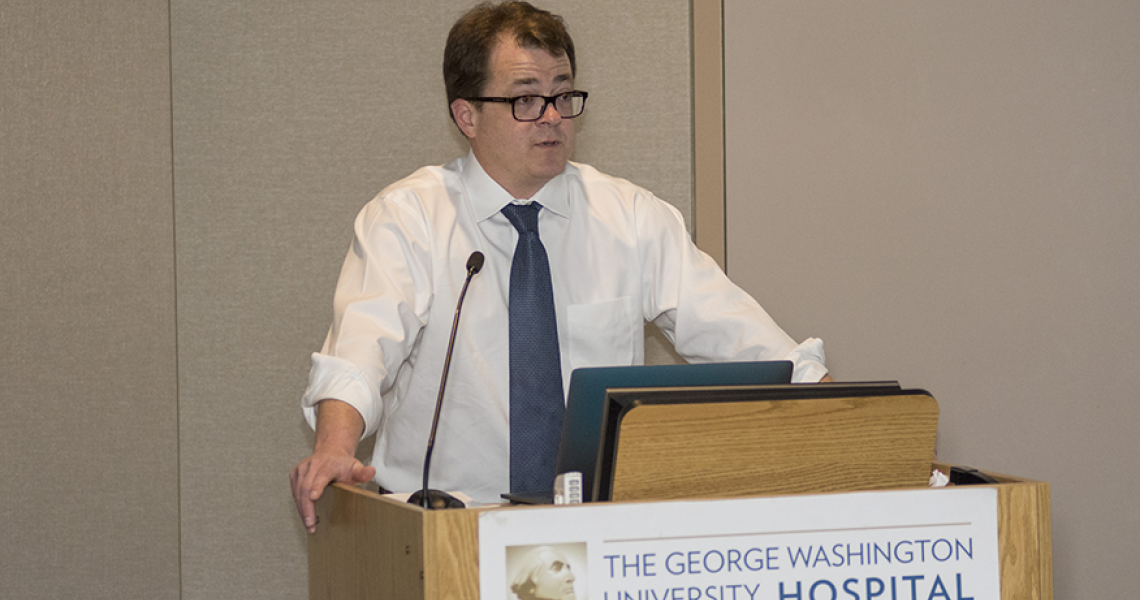 People today are faced with an onslaught of identity challenges, in part because of social media and the 24-hour news cycle. Cultural identity and the understanding of one’s self play into how the brain processes information and in how violence is motivated by one’s identity, both of which were discussed at the George Washington University (GW) Department of Psychiatry’s most recent Grand Rounds.

During the event, James Griffith, MD, chair of the Department of Psychiatry and Behavioral Sciences and Leon M. Yochelson Professor of Psychiatry at the School of Medicine and Health Sciences, and Kevin Pelphrey, PhD, Carbonell Family Professor in Autism and Neurodevelopmental Disorders and director of GW’s Autism and Neurodevelopmental Disorders Institute, spoke about the role cultural identity plays in an “us vs. them” mentality and how neuroscience can contribute strategies for intervention.

“[Both] compassion and brutality can exist in the same person at the same moment depending on whether the person is in my in-group or an out-group,” Griffith said. “But, where do cultural identities come from? Where in the brain is the ‘I’?”

Griffith said the point of reference for the answer to the question “who am I?” is the default mode network, or the brain’s “resting state.”

“What’s remarkable about the default mode network is that it activates when you’re not doing anything,” Griffith noted. “You’re not doing any mental work or any goal-directed physical movement. … It’s during states of musing, meditating, day dreaming that the default mode network activates. It helps a person anticipate what environment should be next expected, which gives the context for what to do next. This continuous calculation is thought to … give us a visceral sense of who we are.”

This also gives rise to what is known “umwelt” — the space around a person that feels like their space. But violations of one’s umwelt, he said, feel like an identity threat, which evokes the same response as if there had been an actual physical threat to one’s body.

Social cognition, which is the brain’s capacity to perceive and utilize social information about other people, operates through two different channels, added Griffith. Categorical social cognition only perceives other people in terms of their group membership. It operates automatically to quickly give a sense of who are “my people.” Person-to-person social cognition, however, makes psychological sense of other persons as individuals, including their emotional states, Griffith explained.

Pelphrey’s talk focused on the social brain. In today’s world, he said, there’s a concerted effort to challenge and provoke, and there are systems in the brain that activate when you hear something that challenges your identity, systems that are hooked into the feeling of reward.

“It’s like it’s giving someone [the motivation] for being a political animal, for loving to hear gossip, especially when it’s about the group a person doesn’t like. It helps you constantly categorize things as either in your group or out of your group,” Pelphrey said.

“This system, it’s reading your intentions and your beliefs and matching them and helping you set up an expectation and then seeing what someone else does and comparing them,” he added. “If they don’t match, that’s when it’s most active and that’s when your reward system is most active.”

If people who run social media sites know enough about that system, Pelphrey noted, they can play into it and get people to click on things all day long, including things that will make them angry. It’s a method to get people to react.

However, Pelphrey echoed Griffith on the importance of people getting outside of social media and the news, and interacting at a personal level to better try to understand one another’s points of views.

“Just because something has a biological origin or explanation, doesn’t make it inherent or privileged in any way,” he said. “We’re humans and so we can shut down that stuff pretty remarkably. We still get to choose to behave or not behave.”